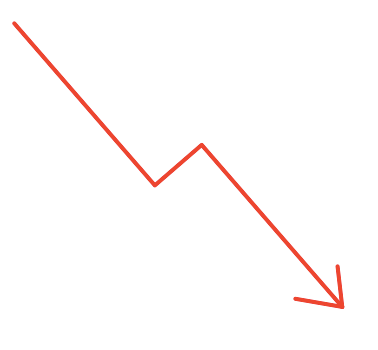 President Trump is, at the moment, not a very popular president.  According to FiveThirtyEight’s presidential approval rating tracker, he currently has a -11.7% net approval rating, which means that the percentage of people who disapprove of his performance is 11.7 percentage points higher than the percentage of people who approve of his performance.  Moreover, Mr. Trump has had a poor net approval rating for almost his entire presidency.  The fact that Americans are currently not enthused with the president’s job performance seems to be an ominous omen for his re-election prospects.  But to what extent is this true?

I decided to do a quick dive into the historical data by utilizing the net approval ratings of previous presidents, also maintained by FiveThirtyEight.  I collected net approval ratings for all presidents in their first term since Jimmy Carter.  So we have six historical data points: Presidents Jimmy Carter, Ronald Reagan, George H.W. Bush, Bill Clinton, George W. Bush, and Barack Obama.  Four of these six men successfully won re-election. 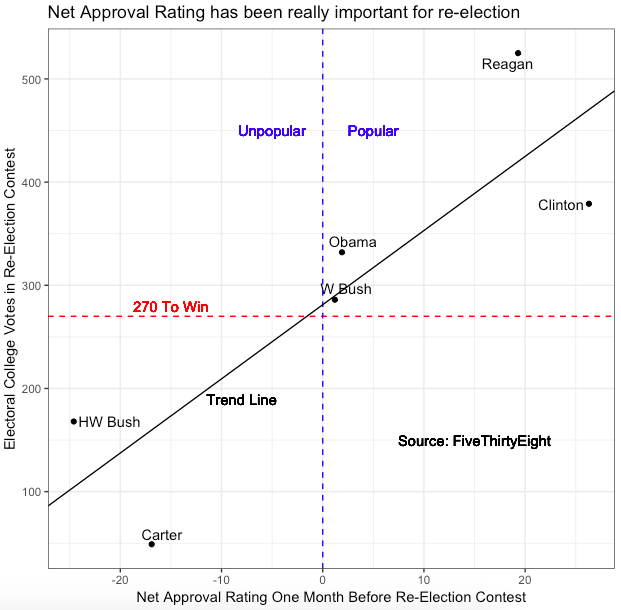 Looking at this plot, it is no surprise that Jimmy Carter and George H.W. Bush failed to win a second term.  They were really unpopular!  The two were well under water; their net approval ratings one month before election day were -16.9 and -24.6, respectively.  Each president whose net approval rating was above +0.0 won a second term, even presidents George W. Bush and Barack Obama who were only narrowly above +0.0.  If more people approve of your job than disapprove, this has been a recipe for re-election.

Moreover, as you can see for yourself, the trend line actually fits the data pretty well.  The R-squared, a measure of goodness of fit between 0 and 1, is 0.71.  This means that net approval rating one month before re-election has been a good predictor of electoral college votes.

Two major points of caution need to be mentioned.  The first is that, as with most analysis of presidential elections, we are working with a really small sample.  There are only six data points we are using here, which means that loads of uncertainty need to be heaped onto any conclusions.

In fact, the correlation between these two values is just -0.01.  As you can see in the graph below, the public’s opinion of the president can certainly change over this time period.

Past history suggests that Mr. Trump’s net approval rating closer to the election may not be the same as it is today.  Though it is telling that the president has had a fairly stable (and poor) net job approval for most of his first term.

So what are we to make of all this?  Well, if President Trump remains unpopular in October of 2020, then this will be a harbinger of an uphill re-election battle.  He would need to face a similarly unpopular challenger (as he did in 2016) and/or maintain his standing in pivotal midwestern swing states (where there is some evidence he is more popular than he is nationwide).

Ultimately, we will have to wait and see if the public still fairly strongly disapproves of the job President Trump is doing in November of 2020.  If it does, he will probably fail to win a second term.